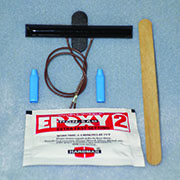 Stress sensors enable home automation installers to create automated lighting systems in homes, galleries, museums, and other businesses.  Stress sensors are invisible.  They mount on the beams under the floor boards and respond to minute flexes in the flooring.  Placed in strategic locations around a room, stress sensors not only detect when a person enters a room, they are also sensitive enough to detect a person shifting position while sitting in a chair.

Pulsor stress sensors are effective on almost any type of flooring.  Environmentally-sealed and wired with marine-grade, 22-gauge wire leads, Sure Action stress sensors provide optimum results for both indoor and outdoor lighting applications.

Used on most flooring. 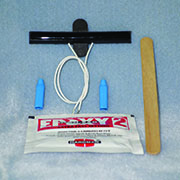 Used for extremely stiff flooring such as engineered trusses.

Used for seemingly inflexible materials.  Example, application where Pulsors were installed in a hurricane-proof home made of concrete.  Application has to be approved by us.

What is a Pulsor? |  Snapshop of Pulsor |  Application Ideas | Success Stories | Testimonials |  Yachts